On Nintendo, EA, the industry and the existence of Jesus. 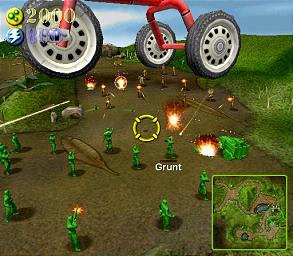 Screen from one of the many Army Men titles
Well, not the existence of Jesus. Everyone knows that, following a virgin birth, the son of God went around magically healing lepers and making the most of a small helping of bread and fish. Oh, and walking on water.

Which, in a round-about way, leads us to Trip Hawkins. The man was instrumental in the emergence of EA as a major player, though the Army Men-focused (or should that be obsessed?) 3DO fared somewhat less well, with a defunct console offering eventually dragging under a stagnating software business.

However, now at a new mobile-phone company, Digital Chocolate, Hawkins recently offered up some thoughts on the pressing industry points to Xbox 2 News. ?Console game publishing has become more like theatrical release film-making and it is very hard if you are not one of the major publishers,? he said. ?And even for them it is hard unless they are working with major game brands. It is very unfortunate that it is now very hard to innovate because of the cost-structure.? No one at this point should mention the constant innovation of Army Men. It wouldn?t be fair.

However, the future isn?t set in stone, and when asked about the big, emerging players, he said, ?The candidates would be EA, Sony, Microsoft, and Konami. But any big change is more likely to result if there is a disruptive event such as new technologies or platforms that have a surprising effect on market share.? He continues, ?My magic eight ball says Nintendo will be acquired by Microsoft within five years.?

And the big question that?s igniting playgrounds the world over ? will we see the emergence of 3DO 2? ?Uh, let me think about it? I?ve decided. No! That is like asking me if I want to put my hand on a hot stove again.?

For reference, Digital Chocolate is the developer behind Mafia Wars, one of the best-selling mobile games of last year.
Companies: 3DO Studios
People: Trip Hawkins

If M$ really wanted to stamp out Sony, they could do worse than acquire the grandaddy of video games.

I agree it's not likely, but you never know.

alex webb 23 Feb 2005 21:37
3/5
No way Nintendo is being acquired by microsoft. Even if it did, it wouldnt help microsoft in any noticeable way. Japanese would flock to Sony, because microsoft is a Gaijin company. Dont think the reason why XBOX isnt selling is because it sucks, quite the contrary Xbox has alot of good games, many of which would sell in Japan. Unofrtunately, they are american so they are blacklisted. Anyway, buying nintendo might help in america but it wouldnt do anything in Japan, except further widen sony dominance.

I just can't see a successful Japanese company selling out to a western giant. There are plenty of possible buyers in Japan.
Posting of new comments is now locked for this page.