World of Warcraft's Morhaime for Academy Hall of Fame 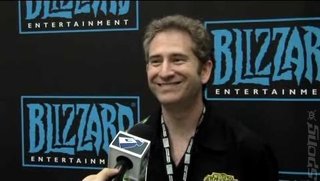 The Academy of Interactive Arts & Sciences (AIAS) will induct Mike Morhaime, the president, CEO and co-founder of World of Warcraft maker Blizzard Entertainment into its Hall of Fame in February next year.

This honour comes in just weeks after it was announced that Blizzard (owned by Vivendi) will become part of Activision Blizzard - in a deal that is set to create the world's second biggest third-party developer.

AIAS criterion for the induction is that the individual should "bestowed upon individuals who've contributed to a significant advancement within the industry, while demonstrating proven success and leadership."

The academy comments that, "World of Warcraft has cemented Morhaime's influence and impact on the multi-billion dollar interactive entertainment industry; it is the world's largest online game, with more than 9.3 million subscribers. Morhaime and Blizzard Entertainment are recognized for creating an MMOG that expanded the traditionally hardcore audience of the genre to also include the broader casual-gaming audience".

Morhaime joins the following incredibly star-studded line-up (companies for which they worked at the time of induction are show in brackets - points of interest after).