More typing games on horizon, this time for PlayStation 2 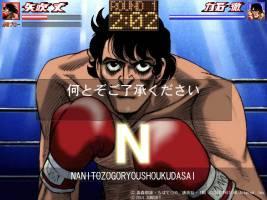 “Ashita no Joe Typing” is based on the popular Japanese comic Ashita no Joe. As with “The Typing of the Dead” and “Virtua Fighter 3TB”, the emphasis will be on typing speed, with players typing whatever appears on screen as fast as possible in order to perform attacking or defensive moves.

When you think about it, it seems strange that typing games have only recently come into their own. In the past there have been typing themed games but they have always been strictly educational. Mavis Beacon has been around for years, (although she does look better with every release,) and her titles have always featured some typing gamery. The thing that baffles us is that the technology to perform the basic game play behind this new batch of typing games has been around for donkeys’ years. Platforms such as the Amiga and the Atari ST would have been perfect for typing based combat titles. The only thing that has changed or improved is the graphical capabilities of our gaming machines. Are we really that fickle?