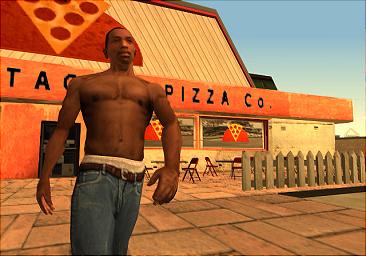 Rockstar?s sales team in the US has seemingly let slip the release date of the as-yet untitled GTA offering for Sony?s PlayStation Portable, giving the game an April 15 release date.

The date is for the US only and now resides on various American retail and games sites as a permanent fixture, good news for Sony as it struggles to furnish its wonderful debut handheld with quality, must-have software.

Nothing is known of PSP Grand Theft Auto, other than it will be set in Liberty City and will follow on in the free-roaming third-person 3D styles of the last three offerings.

SPOnG expects some solid info to be offered by Rockstar within the week. We?ll let you know as soon as something more substantial is available.
Companies: Rockstar

acidviper 15 Feb 2005 15:54
1/15
I have no clue how they are going to do this. The starting loadup on PS2 is 3 minutes of loading and the city is constantly streaming, especially if you have a fast car. I'm guessing they are going to stress smaller indoor environments and less of the massive outdoor enviros - hooker killing and street racing.

vault 13 15 Feb 2005 17:49
2/15
acidviper wrote:
I have no clue how they are going to do this. The starting loadup on PS2 is 3 minutes of loading and the city is constantly streaming, especially if you have a fast car. I'm guessing they are going to stress smaller indoor environments and less of the massive outdoor enviros - hooker killing and street racing.

Have you seen the screens from some of those games? I don't know about the UMD access times or anything, but they definitely have the power to process those polys.

LUPOS 15 Feb 2005 18:55
3/15
vault 13 wrote:
Have you seen the screens from some of those games? I don't know about the UMD access times or anything, but they definitely have the power to process those polys.

im pretty sure viper was reffering to the drain it woudl cause on the battery to be able to stream that persistant expansive world. Especially considereing they are using the original liberty city. If they where making it enterily new they could design it ground up to be more suited for the platform but porting over a prexisting layout will probably require sacrifices in texture and charcter variety and complexity... of course... would a run over hooker with 50% less polygons smell any less sweet?(it is still a small screen when compared to a tv)
plus the GTA loving crowd in general arent the most fikle (spelling?) gammers int he world so a little bit of a graphical downgrade probably wouldn'y hinder the sales in any serious way. GTA is basically a license to print money at this point.

are the first two gta games not availbale on the xbox? i wasnt ragging ona platform or any particular person... but when a game sells 10 million copies one has to assume that the larger percentage of owners isnt "hard core" as i dont think there are 10million HC gamers int he world period.

when im picking a console war you'll know it... no need to instigate one

nobody said anything sucked... all i was sayign is that it wouldnt suprise me if this game doesnt exactly look as good as san andreas.. or even just gta3 because its :
a) on a tiny screen
b) on a slightly weaker system (there are differences between a psp and a ps2, althogh i nto expert)
c) because even if it doesnt look quite as good as the other it will still look damn impressive in general and will still sell like hot cakes. not to mentio the fact that peopel who trully enjoy the way the game plays and own a psp will definitly buy it anyway... infact basically anyoen who owns a psp will most likely buy it... especailly since there is very little else availble right now or int he imediate future.

im not raging on sony or anythign else so stop trying to defend it... as much as i hate sony in geneal the psp is pretty awsome... and kind of funny consodering its basically as strong as the ps2 and will cost about the same price when it comes out... of course i always thought the price of the ps2 was kind of insulting since it is basically weaker than the game cube in everyway.

did i say halo2 on live wasnt full of assholes? infact there are way more ass holes than peopel liek me... which means... if the next halo wasnt all that great since it is so popular and big onlien it woudl still sell a s**t ton... i never said it wasnt in a similar situation.. infact untill now no one brought it up.. you keep trying to defend something i am not attacking... find something better to do with your time... dad?

vault 13 15 Feb 2005 20:15
10/15
Just because you didn't say doesn't mean you were implying it. Would you say the same if Halo 2 was coming out for the PSP (or a Microsoft portable device if you will, *snicker, snicker,) and the graphics weren't nearly as good? "Oh no one will probably care considering Halo 2s fanbase." Calling GTA players non-fickle is a direct or indirect maybe hit at the PS2 fanbase. Your saying in more or less words, hey if I can do what I do on PS2 more or less, I won't care that the graphics suck and my options are limited. You hate GTA, I know, but don't say that people probably wont care if it's not as good as the PS2 version. That's an unwarranted statement. You're probably right that it will push systems and all and probably be one of the best launch titles. But then again, no one's really buying the Gameboy alternatives. And THERE GOOD TOO!

i swear there is some sort of blockage between your eyes and mouth and and brain cause somethign just keeps getting lost int he middle, but anyway...

if M$ was comign out with a portable and it was going to have a portable version of halo one and someone said... "hey i wonder how they are going ot make this game cause halo is constantly streaming to and from the hard drive, thats how they make it not have any load times" i woudl indeed say "they will probably have to make soem graphical sacrifices inorder to keep it runing smoothly and not kill the battery. it shouldnt matter thought cause im sure it will still sell a ton".

now... woudl i have pointed out that a huge percentage of halo players arent hard core... no, no i woulndt have.... but then i also wouldnt have had a great hooker joke to follow it up with. plus halo2 will never sell as many copies as gta, so potentially the percentage of "real gamers" playing halo2 coudl indeed be better than GTA's. Infact the only reason i chose to say it is because it is probably the biggest sellign video game ever... period... i dont know anythign that has moved as many units. Also the same coudl be said of the PS2... as it has sold 3-4 times as many as any other console. (sans the game boy but we arent talking about that). Now i dont have any sort of hard facts or surveys to prove these staments... nor to i claim they are factual... they are just my assumptions... but considering the average consumers console of choice is the ps2 it is not unlikely that my asusmptions are correct.

if you are some how trying to point out im biased... no need... anyone who reads these borads at all is well aware of that by now. if you woudl liek to argue against my main point that some graphical sacrifices will be made then go nuts... id be intrested to hear your theory... is if you want to make a huge argument about my mildly anti sony/GTA jokes that i taked on tot he end of my post... well.. i really dont feel like it... i was tryign to be an ass... it was a joke... move on with your life... do something productive... hows that web page coming?
_______________