Sony exec comes up with the news in a form of waffle... 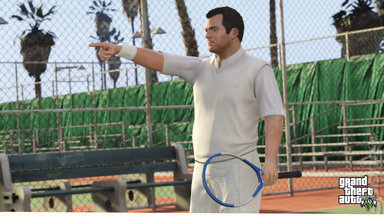 Maybe some good news for Sony - that we expect Microsoft to counter at any moment - is that the PS4 will be getting some kind of exclusive Grand Theft Auto V content.

Sony Computer Entertainment America marketing man, John Koller, divulged the (sketchy) details during E3 recently via some waffle first: "I think GTA V is a title that did extremely well on the PlayStation 3. In fact the index rate swung well in PlayStation's favor for GTA V, a lot of it because of the partnership we had with Rockstar." However, he did get a little more direct...

He was asked directly by Kotaku: "Is there anything to that particular deal or that particular offering that will make it better-suited to play on PS4 instead on any other platforms?"

Which we think means, "What exclusive stuff will there be for PS4?"

He responded, "I don't think we announced anything publicly on that, but there will be," which means "Yes, yes there will be."

Then he went on a bit more, "We would expect that to happen here, too. GTA is a PlayStation franchise. It started with us. We really feel strongly that it belongs as a key platform driver for us."