Exclusive: SNK Executives on Japanese Arcade Industry and the Problems with Sony America 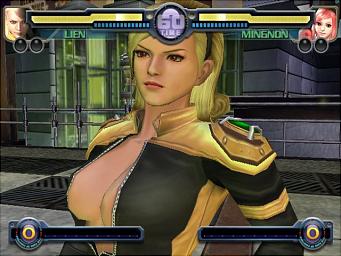 Shot from King of Fighters: Maximum Impact
All Images (3) »
We recently had the pleasure of sitting down with Yoshihito Koyama and Shinya Morishita, the director and manager respectively of SNK Neo Geo?s overseas business arms. Koyama-san, number three in the SNK corporation, chose to speak to SPOnG to answer some of the more important questions playing on the minds of the SNK fanbase.

First on the agenda - or not, as it transpired - was Aruze Corporation and its tempestuous involvement with the intellectual properties of SNK. We asked for an update on the situation, which has been an ongoing saga at SNK for a good three years. "That?s not something we can really talk about", explained Morishita-san. "It?s an ongoing dispute."

Koyama-san clarified, ?The issues between us is one of copyright infringement. We have just published the third book on the subject over in Japan ? it?s a long story...? Fair enough.

Indeed, the battle between Aruze, which swooped on a deal with SNK of old days before the company fell from the face of the planet, is now at the stage of arguing various Aruze earnings, balanced against estimated losses suffered by SNK on several pachinko machines, and is something of a mess to say the least.

But onto more exciting topics. How exactly does SNK operate today and where does the ownership of any IP lie? ?Right now, SNK owns all of its own IP and that is how things will remain,? asserts Koyama-san. ?The holding company, SNK Neo Geo, is a separate entity looking after all of our properties?. This is good news for fans, many of whom had, especially in SNK?s darker days, predicted the fragmentation of the range, as the more popular and famous brands were available for cherry picking by the wider games industry.

And on to SNK today, and its rather exciting, if long-overdue hardware upgrade program. In something of a battlecry that will warm the hearts of King of Fighters enthusiasts across the world, according to Koyama-san, there was no gameplay reasoning behind the ditching of the MVS (Multi Video System) and SNK would happily support the platform today and into the future. The problem with the system was that despite its best efforts, SNK just could not protect its development investment from pirates. ?There is no reason why the system could not be used now and in the future,? he said. ?Our games regularly are in the top earnings chart for the Japanese arcade industry ? players can see the gameplay value of what we offer and we have not been held back by the hardware platform we use. The main problem is the pirates.?

Morishita-san explains, ?We released King of Fighters 2003 in Japan. Within two days we were seeing copied versions of our game from China hitting the open market across Asia. And with that level of organised piracy, our time spent developing and launching the game means it is almost impossible to balance. Our games have also been spread across the Internet, another reason why enhanced hardware technology will help us. With King of Fighters 2003, we spent a lot of time and energy trying to protect the game from pirates. If our best efforts then see pirate versions shipping within two days, it becomes time to move on.?

A similar affliction plagues SNK?s home cart AES versions of its arcade games. It was confirmed that after the release of Samurai Spirits Zero Special, no more AES cartridges would be released. ?I know we?ve said that before,? said Morishita-san, but this time we mean it.?

SNK?s concern about the level of game piracy in Asia shows through again when talking about the firm?s involvement with Sammy, the pachinko giant that recently swallowed Sega whole. Providing an update on the situation, Koyama-san explained, "The board of directors at SNK and Playmore has for a long time been great friends with Sammy?s chairman Hajime Satomi. We approached Sammy over a year ago to look at options we might have to beat the game pirates. The decision was to make use of Sammy?s Naomi-based AtomisWave coin-operated gaming platform that is secure. That is the extent of our relationship."

Morishita-san explains, ?Right now we have four games confirmed and we are looking at more projects. The games already revealed are King of Fighters NeoWave, King Of Fighters 2004, Samurai Spirits 6 and Metal Slug 6.?

Moving on to the arcade scene in Japan, we discussed the situation as it stands today, starting with the Sammy buy-out of Sega. ?Sega had been making a loss for sometime,? said Koyama-san. ?Now, it won't.? Seems simple really. But why is there a growing feeling that traditional games companies urgently need to evolve en masse? ?There has always been a relationship between arcade games, slot machines, pachinko and pachislot has always been close (sic). However, gambling machines have been making good profits for some years, since the relaxing of certain laws. Although it is still heavily policed, the return-per-unit count of pachinko and pachislot is very high. For instance, for Sega to make a deluxe dedicated arcade game takes a lot of time and costs a lot of money. The final arcade cabinet can cost in excess of Ł15,000 and the return is never assured. Compare this to an example from the pachinko industry. Sammy released a game earlier this year, costing around Ł1,500 for an arcade hall operator to buy. Sammy shipped over 500,000 units of this machine, so you can understand how much money there is be made from the basic demand. Then remember that Sammy owns some of the halls in which the machines are operated and the true value of this becomes clear.?

Although the SNK representatives made it perfectly clear that the embracing of pachinko is essential for the games business to survive, there was an unspoken message shining through ? the firm will use these revenues to consolidate and expand its game offerings, both in the arcade and home sectors. Which, as gamers, is exactly what we want to hear.

Moving on to recent difficulties with the submissions process at Sony Computer Entertainment America, Koyama-san let the firm?s frustration with recent events be known. As regular readers of SPOnG will know, SNK?s US offering, headed up by the infamous Ben Herman, has had some difficulties in its attempts to get games already on open sale in Japan accepted as stand-alone PlayStation 2 releases. ?Sony just isn?t interested in 2D games anymore ? whatever it might be,? exclaimed Koyama-san. ?And yet many games, as long as they are in 3D, trickle through all the time. It?s a crazy situation and we don?t believe it reflects the needs of game consumers."

However, won?t most games from here on in be in 3D? With the new focus on current-generation home machines and a fully three dimensional arcade platform, surely the ghost of 2D gaming, powered by the now defunct MVS, has disappeared forever. Surely the next incarnations of Metal Slug, KOF and Samurai will be in 3D? We get a knowing look from both Koyama-san and Morishita-san and at this point, with something of a wink, the interview ends.

SNK has always walked the line between hardcore obsession and mainstream obscurity. In fact, it invented it. Right now, the core of the firm in any meaningful sense is the IP which it has built up over the last fifteen years or so. And right now, that IP is in its safest position to date.
Companies: Aruze SCEA SNK Sega Sammy Holdings
People: Shinya Morishita Yoshihito Koyama

Joji 8 Jul 2004 12:17
1/2
I'd have to agree with Koyama one this. Sony are getting really picky about what games their system gets, perhaps a little to much. In their minds 2D games aren't en vogue which is a shame, I think it's important to keep a balance between 2D and 3D. I think any console would welcome Metal Slug and co to their system without them being in 3D, and I'm glad I'll soon be able to bag a 2d version on my GBA.

As for the arcade tech change it would have happened sooner or later, with rivals having done the same ages ago.

config 9 Jul 2004 09:10
2/2
Remember that little 2D game called Worms? SCEE didn't want know when that was submitted. SCEA have the same blinkered view of the gaming landscape. Odd though how SCEE rolled over when they saw how succesful Worms turned out to be.

IIRC, something very similar has just happened with Viewtiful Joe.