Tretton says it's time to go 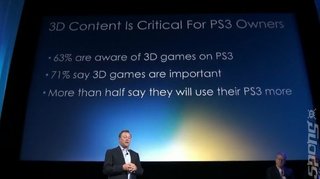 In a terse statement that reads more like a man breathing out heavily and with great relief than a sad farewell, the President and CEO of SCEA (Sony Computer Entertainment America) handed in his public notice today.

Jack Tretton, the man's been through a lot with PS3 which never got close to garnering the loyalty, love or sales of its predecessor. He's now come up for air with the comparitively raging success of the PS4. He made his announcement as follows:

"It is with mixed feelings that I inform you that I will be stepping down as President and CEO of SCEA effective March 31, 2014. This is a result of a mutual agreement with SCEA, and I leave knowing that the PlayStation brand has never been stronger, PlayStation 4 momentum continues to accelerate, and the future will only get brighter for our gamers.

"Serving PlayStation fans for the past 19 years has been one of the most rewarding experiences in my career. Your passion for gaming inspired me every day.

"I want to thank you for constantly pushing PlayStation to deliver breakthrough gaming and entertainment experiences, and to never settle for ?good enough.? The embodiment of this commitment can be found in the PS4, which has quickly become the #1 next-gen console worldwide?thanks to you.

"We?ve shared many memories over the past two decades and I?ll always be grateful for your support.
Thank you,

Given that's Jack's been with the company for 19 years, and that PS4 is doing well, we can only speculate that he's going on a very long, very relaxing holiday before popping up again at Microsoft... or Twitch... or Activision.

Check out a long and interesting list of Tretton based tales right here.

Dec|'13
Tretton on PS4 Shortages: 'No, Sell it, I'll Get one Later'
Sep|'13
Caught on Film: Inside Sony's New PlayStation HQ
Mar|'14
PlayStation Network Gets First 'Exclusive' TV Content with Powers
Dec|'13
Why Is Jack Tretton's Heart Broken about PS4?