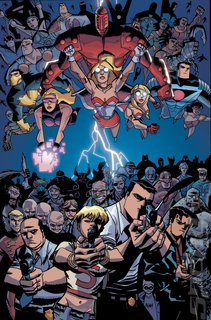 Sony has picked up its first piece of exclusive-ish TV content in the form of Powers, an adaptation of the comics series of the same name by Brian Michael Bendis and Michael Avon Oeming.

The comics series revolves around Christian Walker and Deena Pilgrim, detectives assigned to 'powers' related cases - usually involving superheroes and/or supervillains. The WSJ, which broke the news, only mentions "crimes involving people with special powers". Whether that means the costumes have been stripped out or just that WSJ wasn't being specific in its wording is up for grabs.

Quite how Powers (and any future TV PlayStation-exclusive TV content) will be monetised hasn't been said. Sony's investigating creating its own Internet-based TV service, but it could be that it charges for Powers directly through PSN, either per episode or on a subscription basis.

Powers has only been confirmed as a PSN-exclusive in the US, and Sony will apparently sell the overseas rights to other outlets. It's unclear when the series will launch.

Bendis and Oeming are attached as executive producers, as are unnamed execs from The Walking Dead. Powers has had a winding path to getting commissioned, with the series having spent a lengthy period in development at FX.

Microsoft has its own content in the pipeline for Xbox Live, with Steven Spielberg attached to a live-action series based on Halo.
Companies: SCEA