Staff at Microsoft game studios given their marching orders 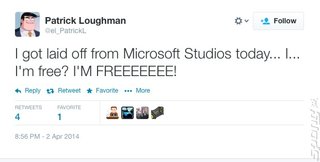 It is being reported - and confirmed by Tweets from those involved - that Microsoft Game Studios is making people redundant right now.

Tweets such as this one, "I got laid off today at Microsoft and our KickStarter for #habitat just launched. Help me fund my dream :)" from Elbert Perez, a Technical Producer at Microsoft Studios leave little to the imagination.

This news comes shortly after Phil Spencer was put in overall charge of all things Xbox at Microsoft. Whether not it's just these two vociferous staffers who were laid off is unclear.
Companies: Microsoft Game Studios
People: Phil Spencer

Mar|'14
Halo 2 Anniversary Multiplayer "Would Have to be Fantastic" - Microsoft
Apr|'14
Xbox Division Gets Taken Over by Spencer
Aug|'13
Spencer: Microsoft is Committed to Xbox 360 for "Years"
Aug|'13
Phil Spencer Kinda-Sorta Talks About How Xbox One's Quantum Break Will Work