Spat as Stan Collymore gets dirty with FM fans 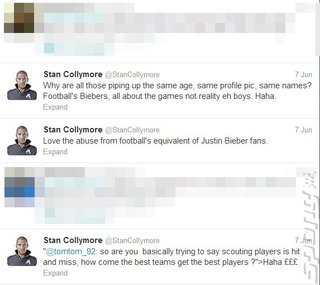 "Love the abuse from football's equivalent of Justin Bieber fans", was just one of the Tweets that saw a war of words between the fans of Football Manager series of management games and former Nottingham Forest and England football player, Stan Collymore.

Stan didn't stop at FM though, he was basically feeling the lack of love for video games relating to footy generally: "Watch over 100 games a season, all clubs all leagues. I don't sit on the couch waiting for FIFA13 to tell me who a player is. Cheers," he tweeted in a to and fro' that also included such gems as:

"BS saying FM/FIFA only way to know new players. Million free feeds of virtually every known league anywhere. Lame excuse!" Stan was, it must be said, fighting a little bit of a battle with his absolute slaggings of. "Stats are important. However, only football illiterates use them as a fundamental building block of their own football knowledge", he said.

But things also got a little bit "tasty" with Stan stating, "So FM players winning a tournament on a game is better than wearing real liver birds and lions on your chest. Fucking deluded children."

That said, Stan was facing such insights as, "FM is a religion, not a game!".