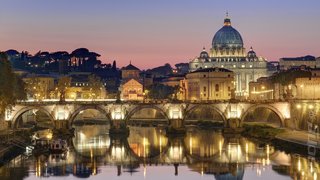 Nowadays we're not allowed to call it 'piracy' as that is quite glamorous. We now call stealing games via download, 'illegally downloading'. Apparently someone in the Vatican City is stealing work from Miles Jacobson.

Jacobson was speaking at the London Games Festival about the huge numbers of illegally downloaded copies of Football Manager.

According to Jacobson, 10.1m people illegally downloaded Football Manager 2013 with 3.2 million of these downloads coming from China, 1.05 came from Turkey and 781,785 from Portugal. But most surprisingly - or not depending on your view of the Catholic Church - of the 547,000 copies pirated in Italy and the Italian region one illegal download came from within the Vatican City.

Sensible as ever, Miles also pointed out that, "he does not believe that one pirated game equals one lost sale "That would be ridiculous to think," he said. But based on the drop in activations, he estimated piracy cost them 176,000 lost sales. He added that 1.74 per cent of illegal downloaders would potentially purchase the game had no crack been available, which would have meant $3.7m in revenue. Revenue he would have spent hiring new members to the team," reported MCV.
People: Miles Jacobson
Games: Football Manager 2014