Man changes his name to PlayStation 2

The gamer formerly known as Dan. 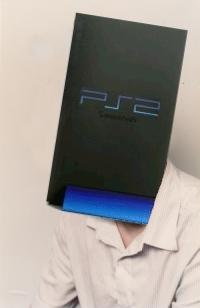 What a Hump!
We all like games. You wouldn?t be reading this, and we wouldn?t be writing it if it were not the case. Some of you, and some of us, are obsessed by games. There are people in our office who have forsaken everything (lovelife, social development, physical well-being and other hobbies/interests ) to play endless hours of Final Fantasy, Gran Turismo, Konami?s football games, et al: the really good stuff, you understand? Obsessing over the nuances of every single aspect of the Groove System in Capcom Vs SNK 2 has used up many an hour in the pub after work. We are sure you will have comparable tales.

There is however, another step for the over-obsessed gamer. There is, in the UK, a man who now goes by the name of?wait for it? Mr PlayStation 2.

Mr PS2 decided that this should be his name from now on, seeing as he was spending around four hours a day playing on his beloved Sony console.

Dan Holmes said that he loved his PlayStation 2 so much, he decided that the only thing to do was to legally change his name to fall in line with his obsession.

Dan wanted to take things even further: "I joked about marrying a PlayStation and asked a few vicars if they would do the service,? he said in all seriousness. ?They didn't seem keen."