Will take elements from 22Cans experiments and Molyneux's past games. 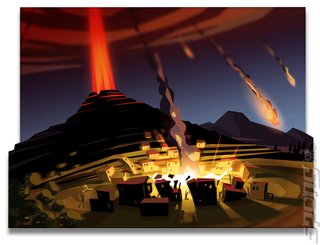 If Peter Molyneux really does only have one more game up his sleeve before he packs it in, then it seems like he's spoiled the surprise. His indie studio, 22Cans, has opened a Kickstarter page to help crowd fund a game called 'GODUS' - described as "an innovative reinvention of Populous."

Populous, if you're old enough to remember, was widely renowned as the original 'god simulator', offering players the chance to be a deity and direct a community by direction and manipulation. GODUS, according to the Kickstarter, "delivers exciting global co-operation, competition, creation and destruction to a whole new generation."

This game will apparently draw on everything that Molyneux and 22Cans have learned from the experiments it is currently conducting (and still working on) on mobile devices. The first of these is Curiosity: What's Inside the Cube? But development will also be inspired by past Molyneux games.

"Populous was created over 22 years ago, and we believe that to date, nothing has come close to emulating its powerfully godlike experience," reads the Kickstarter pitch. "It's this experience we aim to reimagine.

"GODUS blends the power, growth and scope of Populous with the detailed construction and multiplayer excitement of Dungeon Keeper and the intuitive interface and technical innovation of Black & White. The original Populous hailed from the 8-bit era but GODUS will use the most modern technology the world has to offer."

The Kickstarter page is asking for Ł450,000 of funding in order to make GODUS a reality. At time of writing, it has reached Ł43,228 of that goal. In case you missed it earlier in the story, here's the link to the Kickstarter page again.
Companies: 22 Cans
People: Peter Molyneux