Curiosity Winner Will Play God For a Limited Time 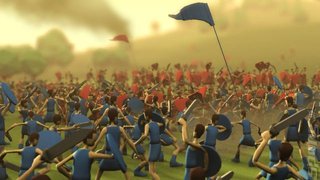 Bryan Henderson, the winner of Curiosity: What's Inside The Cube?, shouldn't get too comfortable in his God Chair. 22Cans' Peter Molyneux has revealed that Henderson will only be the ruler of Godus for a limited time.

What Henderson has won, by being first to reach the goal of Molyneux's previous mobile experiment, is "a grace period where he can be god of gods for a certain amount of time...It won't be less than a few months. It might not be more than a year."

According to our previous report, the Curiosity winner is already working with 22Cans to implement the game world's rules, according to Henderson's own conscience. But his time as God won't actually begin until Godus launches, offering "enough time to make it meaningful for him in every sense of the word."

It's no less life-changing, Molyneux stresses, adding that although Henderson has the power to do almost whatever he likes, he'll have to make sure his wishes are in keeping with the game's balancing and reasoning first. So no "carte blanche uncontrolled, unrefined decisions that would throw the balance of the game out entirely. Bryan can absolutely request something to happen, and we'll make our best effort to do it. But he can't decide everybody in Canada will explode or anything like that. There are limits to his power."

Mar|'14
Molyneux on Godus: "I'm Sorry"
Oct|'13
Molyneux: Microtransations Not Integral to Godus on PC
May|'13
Curiosity Winner Revealed - Gets to Rule Godus
May|'13
Molyneux Teases 'Next Xbox' Event Appearance