Pit Barack Obama and Mitt Romney against one another. 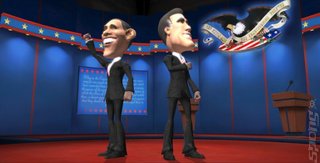 From Infinity Blade to a cartoon political beat'em up. Believe it - Chair Entertainment has released a new mobile game called VOTE!!!, where US Presidential candidates wallop each other for the nation's affections. And the whole thing looks an awful lot like a comical version of Infinity Blade.

The game will be made available tomorrow on the iPhone and iPad App Store for free, and will put players in the hands of either Barack Obama or Mitt Romney as they duke it out with balloon swords, ice cream cones and the Constitution.

Characters can be customised with different outfits and accessories to unlock such as moustaches, clown noses and baseball caps. Watch the (seemingly unbiased) trailer below.