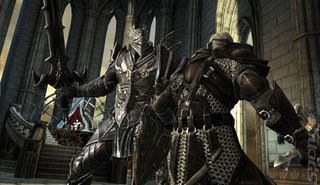 Having fun with iOS gaming juggernaut Infinity Blade? Well, Chair's not going to let you go just yet - it has its first DLC pack coming next week, and like all future updates this one will be free for all users.

The incoming 'Booster Pack' will raise the level cap to 45, add five new weapons, five helmets, five shields and one armour set. You'll also be able to do battle with a monster called the 'Marrow Fiend,' which sounds pant-wettingly nasty if we're being honest.

Chair's Donald Mustard also told Joystiq that the game was almost a Kinect title - although a version for Microsoft's camera device may still be on the cards.

"If we were going to make a Kinect title, what would we make? What would a Chair Kinect game look like? That discussion happened, you know, a year and a half ago. Yeah, if the Kinect really takes off over the holiday season, who knows?" he teased. He also hinted that future updates will expand the story of Infinity Blade and add even tougher enemies.
Companies: Chair