Seriously loads and loads of high class and high talent devs in one place. 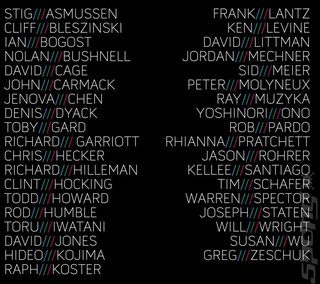 The Critical Path project looks amazing it really does. It's bringing some of the world's best game developers and - in the case of Frank Lantz, a teacher - virtually together to talk about their specialist subject.

The video, which you can see below and over on the project's home page features such luminaries as Hideo Kojima, Nolan Bushnell, Will Wright, Cliff Bleszinski and more. It has a distinctly American feel to it - unlike the more UK focused From Bedrooms to Billions movie.

As it's USA focused, it also features a liiiiiiiitle bit of hyperbole from teacher Frank Lantz saying of the art of making games, "It's going to be complicated, of course, 'cause we're doing brain surgery on ourselves while trying to avoid bears and not step over cliffs."

Elsewhere there is a great deal of sense spoken and we're excited about it. Check it out.