Let's get this made! 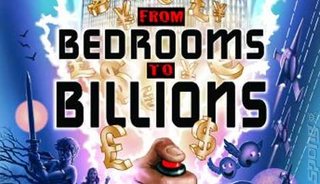 A crowd-funding initiative has begun to help complete an independent documentary covering the history of the UK video games industry. From Bedrooms to Billions is a 90-minute feature length film that aims to tell the story of the British games industry from 1979 to 1996 - and with the help of public funding, will be able to go in more depth than any documentary before it.

British filmmakers Anthony and Nicola Caulfield have a rather lofty goal of $35,000 to reach in 58 days - but it promises that the extra cash will allow it to create a comprehensive "historical reminder of what British industry and talent once achieved," according to the Indie Go Go crowd-funding page.

"?From Bedrooms To Billions? will be a great piece of nostalgic entertainment that documents an important part of UK industry history, starting in the late 70's, spanning 'Thatcher's Britain' of the 80's and culminating in the dramatic shift of fortunes for the UK Video Games Industry by the late 90's," reads the pitch.

"This era is so often overlooked and not known by young British talent looking to enter the games industry, as the vast majority of UK children, school leavers and even students believe that gaming originated mainly from the US and Japan and have little to no knowledge that a British games industry even once existed.

"'From Bedrooms to Billions' has been a very personal project for us since June 2008. Having completed many documentaries we have always wanted to document the rise of the British video games industry and the incredible story that went with it."

Pre-production on the film has already been completed, and production is well underway. The funding will be used to produce additional interviews that will add "some additional stories" that adds an extra dimension to the documentary. The production company has even enlisted the help of legendary ZZAP!64, CRASH and AMTIX magazine artist Oliver Frey.

You can see the project - and donate - at the crowd-funding page here. A trailer can be seen below.