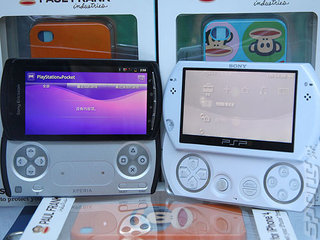 Pic via Engadget
Images the long-rumoured Playstation Phone have emerged - apparently - on a Chinese website it can be revealed.

The website, named IT168, was the place to break the images which show the Xperia-branded device with specs similar to those of the HTC Desire HD. It also carries a generous battery capacity of 1,500mAh, an 854 x 489 resolution on its 4-inch LCD, a 5 mega pixelllll autofocus camera with LED flash for 720p video recording, 51RAM, 512MB ROM, a microSD slot, SIM slot, micro-USB, a second mic on the back of the device and a game launcher app referred to as the Playstation Pocket.

Details remain unclear as to what the app will run with rumours suggesting that PSOne games, PSP games or maybe a new line up of titles altogether will be available to use via the device.

You can check out further screens at IT168 and videos at the Engadget website.

Interested in the Playstation Phone? Any thoughts, feel free to post them in the Comments section below.

Ryan550 7 Jan 2011 15:50
1/3
I believe it will need to support "new games" rather than only play PSone or PSP games because the PSP alone wasnt enough to dominate the handheld gaming market as Sony once thought it would.
The addition of a phone only means that Sony now has to compete with other phone companies (convincing the buyer it is for everyday use) alongside convincing the gamer that sony's new handheld will be fresh and competitive as a gaming handheld alllllllllll while having an affordable price for both consumer groups? that will be tough because this new handheld doesnt strike me as cheap to buy nor to make...

Like i said... it needs to support new games rather than PSP/older titles for it to be looked at as anything other than a fad and at the same time... needs to be affordable enough for the common phone user to give it a second look when compared to the phone's of the competitor's because even the brand of a mobile phone is (unfortunately) important....

PreciousRoi 8 Jan 2011 21:52
2/3
Yeah, not really sure how this will play in Europe and Japan where consumers still slavishly cling to the PlayStation brand, but in the States, I see a PSphone as being just another smartphone, I'm already seeing the iPhone losing much of its cachet through competition with Android-enabled phones...and the "Windows phone" hasn't even really made much of an impact yet...at least among the people I know. Of everyone I knew with an earlier iPhone, only one has gotten a 4, everyone else moved on to an Android. I really don't think either the Windows or PS phones will capture a huge market share, but could easily be proven wrong, handhelds and mobile phones aren't really areas I pay much attention to.

I also agree that PSOne titles are less than compelling reasons to buy a phone.

miacid 10 Jan 2011 10:46
3/3
If my understanding is correct, this is going to be an Android phone that comes with a Playstation app, the only difference from other Android phones is this one is going to have controls similar to the PSP.

So I'd still be interested as I've currently got an Android phone, so would be able to import all my contacts etc... over, the main deciding factor for me will be price!