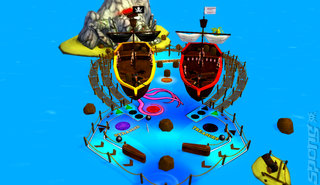 Pinball Yeah
Interplay is due to return to publishing with the announcement of its Interplay Discovery program.

The Interplay Discovery Publishing Program has been set up for helping developers with a complete or nearly complete game get published. Pinball Yeah will see release on Mac, PC and the iPad/Phone4 whilst Tommy Tronic will recieve a PC release with both titles due to be launched in October.

Interplay all but shut up shop in 2004, with the sale of Fallout to Bethesda keeping it alive as a corporate entity. More recently, the company has had a public spat with Bethesda over rights the company retained to produce a Fallout MMO. More messy detail on that here.

Suffice to say, for the moment it looks like Interplay Discovery is the company's main source of revenue.

The aim is to keep things cheap and accessible. A statement from Interplay CEO Hervé Caen tells us ?Interplay Discovery will introduce promising developers from all over the world to the global market by releasing great new games at great prices.?

Expanding on Interplay's publishing process, Caen went on, ?Publishing agreements for promising titles typically can be signed within a few days of product submission. At that point, Interplay's team of design & gameplay experts can help developers through the finalization, optimization, approval and publishing processes. We hope to bring great games to market very regularly, as we are starting to do with these first two games. Who knows, one of these new developers could become as famous as some of the current greats previously published by Interplay.?