Indie Dev to Epic: F*ck Off 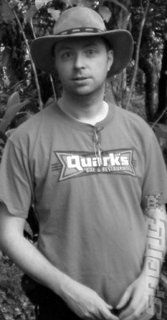 Cliff Harris
Speaking your mind seems to have been a theme at this year's Develop conference. Earlier in the week we had Double Fine CEO Tim Schafer calling Bobby Kotick a 'total prick', now we've got Cliff Harris of micro-developer Positech explaining at length why he thinks "Mark Rein is a jerk."

After a run-in at a Develop panel Cliff, who has written for SPOnG in the past, posted a meaty blog post, explaining, "Basically I started making the point, and mark was also agreeing about how someone can email you as an indie dev, and you can reply personally back to that potential customer, and hopefully, that way you have converted that guy to buying the game.

"At this point, there was this derisive snort from this guy in the front row, who said something to the effect of ?one guy? who cares, that?s a waste of time?. He then started to lecture us on how that?s a silly way to do it. I?m 95% sure that all four of us on the panel thought ?what the fuck?? as well as ?who is this guy?? compounded by Robin asking him if he worked in marketing.

"Anyway? it turned out this guy was Mark Rein from Epic, although he seemed to assume everyone within earshot knew exactly who he was, and why he must obviously be right. I got the impression he was there to laugh at the little guys, or to just inform us how we are all wrong."

Cliff then gets to the point, stating bluntly, "Mark Rein is a jerk."

"Now I suspect this is not groundbreaking news, although it is to me, because I?ve never met him or even seen him before. However, this experience seems to confirm my opinions on Epic and companies like them in general. Now Mark may well look down on humble indies like me. He may well think I?m doing it wrong. he may laugh when me and Mark discuss the pitiful money our companies make, and giggle at the fact that we reply to gamers on a one-on-one basis? But fuck him. I would rather earn minimum wage making indie strategy games for the PC? Than I would work at epic for megabucks. The sheer overwhelming stench of testosterone would probably give me a headcahe, combined with the dizzy excitement of exactly what shade of grey our next game?s space-marine would wear as he kicked alien butt.

"I have absolutely no doubt mark would just naturally assume me feeling like that is jealousy, which, as anyone who knows me personally would testify, is just fucking funny... If Mark from introversion suggests I?m doing it wrong, thats cool, he does what I do, and has some serious experience, ditto anyone on that panel, or anyone with long indie experience. And I listen carefully, often over lunch.

"But Triple-A studio bosses trying to lecture me on how to communicate better with gamers? Fuck off."

Beneath a fair old heaped serving of anger, however, there's a point in there. There's an indication that the big boys don't understand smaller devs and don't understand how publishing on a smaller scale works. If that's a widespread problem, it could create serious issues in the face of the ever-growing casual games market with its focus on smaller games.

What do you reckon?

(Oh, and see our recent interview with Mark Rein here).