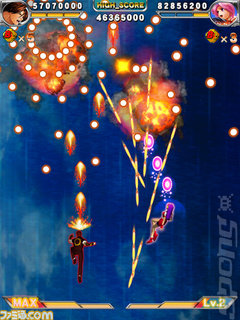 SNK Playmore has announced a new game - no, it's not another fighting game, it's actually a top-down shoot-em-up. Titled Neo Geo Heroes: Ultimate Shooting, it pits some of the most loved characters from SNK's back catalogue against waves of mental enemies.

The game actually takes some cues from arcade and XBLA title King of Fighters: Sky Stage (hitting Japanese Xbox Live in the Summer). This PSP 'sequel' of sorts will contain Sky Stage in its entirety, while providing an additional round of bullet hell in a Neo Geo Heroes mode. A challenge mode, a boss-rush "survival mode," and a variety of screen-configuration options will also be included.