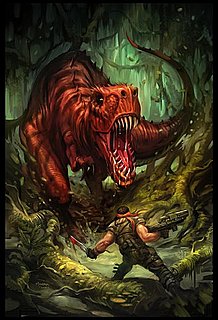 Buena Vista Games, Inc. (BVG), the interactive entertainment arm of The Walt Disney Company (NYSE: DIS), announced today that Classic Media, Inc. has awarded BVG the video game publishing rights to the comic book property, "Turok." A popular franchise in both the comic book and video game worlds, the new Turok games will target the core gamer audience and will be developed by BVG's new Vancouver studio, Propaganda Games. BVG plans to publish games for multiple console and handheld game platforms, including the next generation successors.

"With the launch of the new console and handheld game platforms, we feel it is the perfect time to redefine Turok video games," said Graham Hopper, senior vice president and general manager, Buena Vista Games. "We expect Turok to lead our growth strategy of creating action-oriented game franchises for the core gamer market."

Leslie Levine, vice president of licensing and consumer products at Classic Media, added, "BVG is committed to building Turok into one of their cornerstone franchises to reach the core gamer through exciting new platforms. We couldn't ask for a more enthusiastic team to develop Turok."

The original "Turok" property, created by Matthew H. Murphy, first appeared in comic books in 1954. The story was set around Turok and his young friend Andar, who during a hunting expedition gone wrong; stumble across a prehistoric valley filled with deadly predators. Over the past four decades, hundreds of Turok's dinosaur-hunting adventures have graced the pages of comic books throughout the world, building a global franchise. Turok made his video game debut on the Nintendo 64, and has appeared on the PC and multiple console game platforms, selling more than 5 million units worldwide over the franchise lifespan.

"Through compelling new technology, game design and graphics, it is our goal to take the Turok franchise to new heights," said Josh Holmes, vice president and studio general manager for Propaganda Games. "The brand's rich, prehistoric setting and ferocious monsters provide us an extensive palette of content to create the most intense, action-packed game play for next generation console systems."

"It is our goal to capture the essence of Turok and the rich, prehistoric creatures and environments, and leverage new technology and game play mechanics to create Turok game we've only dreamed about," said Josh Holmes, vice president and studio general manager for Propaganda Games. "It is exciting for everyone at the studio to be a part of building a franchise for the next generation of Turok titles, as we all grew up reading the comic books and playing the first games."
Companies: Buena Vista Propaganda
People: Graham Hopper Josh Holmes