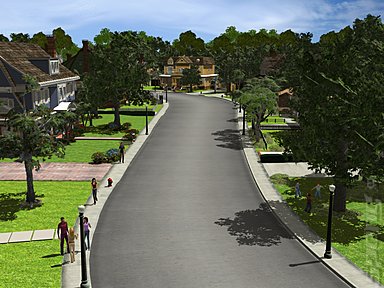 All Images (3) »
Buena Vista Games, Inc. (BVG), the interactive entertainment arm of The Walt Disney Company (NYSE: DIS), today announced it will publish Desperate Housewives, a lifestyle simulation PC game based on the top-rated, Golden Globe-winning ABC-TV series, produced by Touchstone Television. In the Desperate Housewives game, players take on the role of a new housewife who moves into Wisteria Lane and unlocks the delicious scandals hidden in the seemingly "perfect" neighborhood.

"Buena Vista Games is proud to partner with ABC Entertainment and Touchstone Television to bring the popular 'Desperate Housewives' franchise to fans and gamers," said Graham Hopper, senior vice president and general manager, Buena Vista Games. "This game allows players to move to Wisteria Lane and live all the gossip, drama and intrigue of a true desperate housewife."

"'Desperate Housewives' continues to be one of the most popular shows on primetime television and a pop culture phenomenon," said Bruce Gersh, senior vice president of business development, ABC Entertainment and Touchstone Television. "We are continually looking to build upon this successful franchise and believe that extending this program into the world of PC gaming will result in a fun new way for fans to connect more deeply with the series and its captivating collection of characters."

"It's a great opportunity to allow our viewers the chance to be a part of the world of 'Desperate Housewives,'" said creator and executive producer Marc Cherry.

Brenda Strong will reprise her familiar role from the "Desperate Housewives" series as the voice of deceased housewife Mary Alice Young, who serves as the show's omniscient narrator in each episode.

The PC game is the latest extension of the successful global Desperate Housewives franchise, joining a recently announced fragrance launching this fall, a best-selling Season 1 DVD, a board game, a high end line of apparel, a Desperate Housewives online store, mobile ringtones, graphics, personalized application, and an upcoming cookbook.