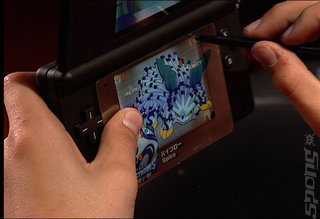 For the first time on the Nintendo DS, players will be able to use collectible trading cards to unlock additional content within the game using the touch screen. In addition, players will be able to download content via a Wi-Fi connection; play together locally via a wireless connection; and take advantage of online community features to extend the Spectrobes experience beyond the game.

"With all of its innovative features on the Nintendo DS, Spectrobes delivers the type of engaging experience fans of action role-playing games are looking for," said Craig Relyea, vice president of marketing, Buena Vista Games. "Following in the footsteps of Kingdom Hearts, Spectrobes is another uniquely original game franchise rich in story, characters and unique gameplay features.

The game features two junior Planetary Patrol officers named Rallen and Jeena who must save the galaxy by awakening, training and collecting prehistoric creatures called Spectrobes. These creatures hold the key to defeating merciless enemies known as the Krawl. Spectrobes fully utilizes aspects of the Nintendo DS, such as its revolutionary touch screen and microphone, through creative gameplay that includes excavating and awakening dormant creatures with the stylus and voice commands.

Included in each Spectrobes game is a pack of four translucent lenticular code input cards, perfect for collecting and trading. Once players unlock the special ability in the game, they can fit a code input card over the Nintendo DS touch screen and use the stylus to consecutively tap numerical holes in the cards, unlocking new content, which includes creatures and minerals. Along with inclusion in game packages, additional trading cards will be available after the game's release.

Once awakened and trained, Spectrobes are powerful creatures that can be used by Rallen to battle against the Krawl or battle other players and their creatures locally via wireless gameplay. Players can enter a one-on-one battle with a friend or participate in an organized tournament for up to 16 players.

Players can also earn the ability to download content such as videos, creatures, custom parts and minerals through a Wi-Fi connection. Also, once connected to the Internet, the Nintendo DS will generate a personal planetary patrol badge number that can be synchronized to each player's profile page on the Spectrobes web site. Players' profiles include information about their Spectrobes creatures, armor and weapons. In addition, a leader board on the web site will track the top scores from several special sequence battles in the game, allowing players to show their success to a global audience.