Premier Hollywood Actors To Star in Cinematic Story Of Turok 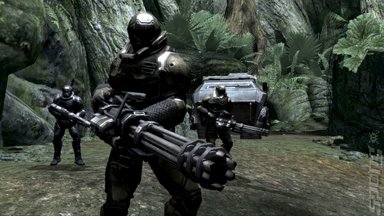 BURBANK, Calif. — (October 2, 2007) — Prominent actors will star as the major characters appearing throughout Turok, the upcoming story-driven, sci-fi first person shooter game from Touchstone. Timothy Olyphant, Powers Boothe, Ron Perlman, William Fichtner and Donnie Wahlberg are among the actors who recorded voices of characters in the game, which will be released on February 5, 2008, for the Xbox 360™ video game and entertainment system from Microsoft and PLAYSTATION®3 computer entertainment system.

Turok is an epic, story-driven first person shooter set on a dark, mysterious planet in the future. The player will take on the role of Joseph Turok, a former black ops commando, now part of an elite special forces squad, known as Whiskey Company, which is on a mission to take down Roland Kane and his army, the Mendel-Gruman Corporation. As Whiskey Company’s ship approaches the planet inhabited by Mendel-Gruman, the ship is shot down. Turok is stranded on the planet and must locate other crash survivors while confronting Mendel-Gruman soldiers and a variety of dinosaurs and other ravenous creatures.

“The actors who lent their voices to Turok are a testament to both the magnitude of the project and the interest of top-notch talent,” said Josh Holmes, vice president and general manager of Propaganda Games, the Vancouver, British Columbia-based developer. “The characters in the story are paramount to the experience and we have assembled an outstanding cast to assure high quality performances across the board.”