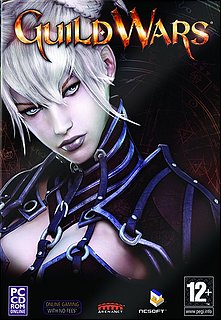 NCsoft® Corporation, the world's leading developer and publisher of online computer games, today announced its line-up of games for the Electronic Entertainment Expo (E3), May 18-20 at the Los Angeles Convention Center. NCsoft's games represent the company's varied offering of massively multiplayer online (MMO) game titles. All products will be shown in booth #1024 in the convention centre's South Hall.

NCsoft CEO Tack Jin Kim said, "NCsoft will showcase a very diverse lineup of blockbuster online entertainment products at E3 this year, which solidifies our commitment to leadership in the global MMO industry."

The products that will be featured at E3 are:

Auto AssaultTM?Already generating excitement in the press as one of 2005's most anticipated games, the world's first car-combat MMO is at E3 and is launching this year! Developed by NetDevil®, LTD., Auto Assault's high-speed vehicular combat and spectacularly destructible environments are the highlights of a game that will redefine expectations of online role-playing. Successfully combining speed, action and role-playing elements, Auto Assault pushes the envelope for MMO gaming. It's the fastest, most destructive MMO ever.

City of VillainsTM?Cryptic StudiosTM, the creators of the massively popular City of Heroes® game, is premiering the companion game that allows players to take on the role of the bad guy. City of VillainsTM is set in the Rogue Isles, a treacherous region not far from Paragon City. Players can now build their criminal empires and spread their own reign of terror. Slated for release later this year, this is the first public showing of this eagerly awaited title since last year's E3.

Guild Wars®?Recently launched simultaneously in Europe, North America and Australia, this first title by ArenaNet® immerses players in a colourful, robust and detailed online fantasy world where success is determined by player skill, not by the time spent playing. Play with anyone, anywhere, at any time and there's no subscription fee required.

Tabula RasaTM?Tabula Rasa is a massively multiplayer online action game that takes you into the heat of battle at the front lines of an epic war between a xenophobic alien race bent on galactic conquest and the coalition of rebel soldiers who've traveled across the galaxy to stop them. Combining the action of a first person shooter, the immersion of a role-playing game, and Richard Garriott's signature creative vision, Tabula Rasa takes the player on an intergalactic adventure where the individual has an opportunity to significantly impact the pace of battle on a global scale.

In addition to viewing all these top-notch titles and speaking with the developers, visitors to the booth will see the high-energy performance art and percussion beat of The Mutaytor, which will interpret the world of Auto Assault in scheduled performances throughout the three-day show. Guild Wars demonstrations presented by the development team will be showcased on a giant video wall display. Plus, MMORadio (http://www.mmoradio.com), a 24/7 web radio station for gamers, will be webcasting three days of continuous E-3 coverage live from the NCsoft booth.
Companies: ArenaNet Cryptic Studios NCsoft Europe NetDevil
People: Tack Jin Kim
Games: Auto Assault City of Villains Guild Wars Tabula Rasa