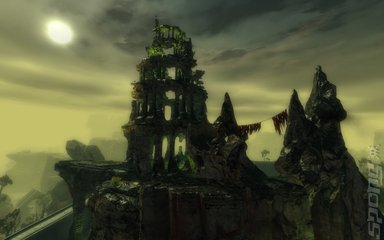 All Images (4) »
NCSOFT® and ArenaNet?, publisher and developer of the acclaimed Guild Wars franchise, are preparing for a memorable showing this weekend at EGX Rezzed in London giving fans in Europe their first chance to play Guild Wars 2: Heart of Thorns, the upcoming expansion to Guild Wars 2. The studio is also hosting an exclusive panel at the show to unveil a host of new content coming with the expansion, showcasing the all-new World vs. World Desert Borderlands map and a range of new mechanics and features that will change the way players experience this unique competitive game mode.

ArenaNet will be exhibiting in East Room 3 at EGX Rezzed, taking place on Thursday March 12 to Saturday March 14 at Tobacco Dock in London. The exclusive Guild Wars 2: Heart of Thorns panel is scheduled for 3:00 p.m. GMT / 4:00 p.m. CET on Saturday inside Rezzed?s Developer Sessions Theatre, and will be streamed online in its entirety via the official EGX Rezzed Twitch channel.

The panel features ArenaNet?s competitive game director John Corpening, environment artist Tirzah Bauer and game designer Tyler Bearce. Those who watch the session, either at the event or online, will be treated to a world-exclusive reveal of some of the most exciting new competitive features coming with Guild Wars 2: Heart of Thorns. The forty minute presentation will offer a glimpse at what players can expect from new WvW gameplay, including the first video of the upcoming Desert Borderlands map.

At ArenaNet?s booth, attendees will have their first opportunity to play Guild Wars 2: Heart of Thorns, meet with developers and win merchandise including t-shirts, lanyards, pins, peripherals and even the much-coveted Guild Wars 2-branded toaster. ArenaNet will also be streaming live gameplay from the booth throughout the event via a special livestream-enabled PC allowing fans who aren?t in London to witness live footage of Guild Wars 2: Heart of Thorns being played by fans via the official Guild Wars 2 Twitch channel.

To follow all of the latest updates on Guild Wars 2: Heart of Thorns and to get more details on Arenanet activities at EGX Rezzed, please visit www.guildwars2.com.
Companies: ArenaNet NCsoft Europe
Games: Guild Wars 2