Bonus games to be included in 2004 budget packs. 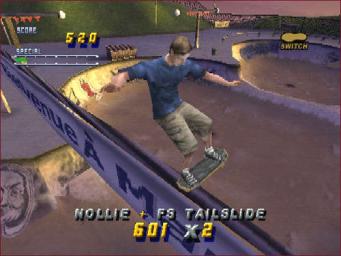 Pro Skater 2
Xplosiv is to offer an extra game in thousands of packs as part of its hard-hitting Christmas campaign this year.

Retailers will be able to order the special Christmas edition Xplosiv titles from October 15th. From the end of October, consumers buying the special editions of selected titles in Xplosiv's core range will find a free game ? giving even more value to price conscious consumers in the run up to Christmas.

An accompanying advertising campaign will run from October until Christmas in national media, including print and radio, as well as the specialist press and online media.

The special Christmas edition packs cover 30 of Xplosiv's best selling titles including the hits: Sonic 3D, Alien vs Predator, Age Of Empires Gold and Soldier of Fortune. The extra game in packs will include quality titles such as Motocross Madness 2 and Tony Hawks 2, and many more.

The newest six additions to Xplosiv's range, due for release in November, include Starsky & Hutch and Space Invaders Anniversary, which are also incorporated in the campaign. Starsky & Hutch buyers will get a copy of Total Immersion Racing absolutely free, while Space Invaders Anniversary customers will get a copy of Bust-A-Move.

"We think this will go down very well in the run-up to Christmas," says Joanne Fawell, European Product Manager of Xplosiv. "Getting a quality game for free in pack when you buy selected titles from our Ł4.99 or Ł9.99 ranges makes them even better value for money. We value our consumers highly and are pleased to give them something extra this Christmas."

The special Christmas editions of 30 of Xplosiv's best selling titles, each with a free game included, will go on sale at the end of October and will continue to be available until December 31, 2004.
Companies: Empire Interactive
Games: Age Of Empires Gold Edition Aliens Versus Predator Motocross Madness 2 Soldier of Fortune Sonic 3D Blast Tony Hawk's Pro Skater 2