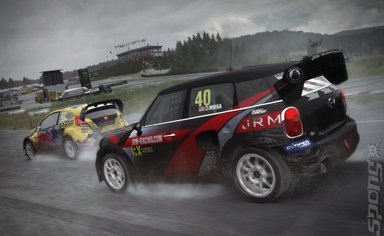 Codemasters has today announced that Volkswagen R will sponsor the forthcoming final of the DiRT World Championships. The final, which will take place on Saturday 26th May at Silverstone as part of Speedmachine, will pit the fastest six DiRT 4 players in the world against each other live on Motorsport.tv and Twitch from 2pm (BST).

The partnership with Volkswagen R will see the players drive the Volkswagen Polo R Supercar during the three rallycross events in the final as well as Volkswagen R branding appear throughout the game and during the stream. The final takes place at Speedmachine, the British round of the FIA World Rallycross presented by Monster Energy, at Silverstone (www.speedmachine.com).

“We are delighted to be working with Volkswagen R on the DiRT World Championships,” commented Codemasters’ Esports Manager, Andy Gray. “It is an incredible brand which brings with it a great deal of recognition and credibility.

“The quality of the competition we have seen so far in the DiRT World Championships has been immense and the final promises to be even better with the best six DiRT 4 players racing it out live at Speedmachine. We cannot wait!”

“Esports is an important and continuously growing field for the automotive industry and Volkswagen R is thrilled to be the partner of the DiRT World Championships at Speedmachine. The finalists are travelling from as far as South Africa, which is incredible and proof of the global community Esports creates. We are looking forward to the finals,” comments Jost Capito, Executive Director Volkswagen R.

Codemasters has signed further sponsorship agreements with Acer Predator, Playseat and Thrustmaster who will all provide equipment for the event at Speedmachine.

Operated in conjunction with Gfinity, the DiRT World Championships have attracted over 20,000 players from around the globe. The top performers in the World Championships events on DiRT 4 qualified for the live streamed quarter finals and semi finals before the fastest six secured their place in the final.

The winner of the Volkswagen R DiRT World Championships will get to test drive an RX2 car, win an Acer Predator Orion 9000 gaming PC, a DiRT Playseat and Thrustmaster wheel.


Streaming live on Saturday, 26th May from 2pm on Motorsport.tv and Twitch.

* Test drive will be subject to terms and conditions. See rules for details.

ABOUT CODEMASTERS:
Codemasters, the award winning video game developer and publisher, has a 30 year heritage. With titles distributed globally, Codemasters is a leading developer and publisher of driving and racing entertainment games including DiRT, GRID, ONRUSH and the official BAFTA award-winning FORMULA 1 series of videogames. The company is fully controlled by Reliance Big Entertainment Ltd. (RBEL). For more information on Codemasters’ product portfolio, please visit www.codemasters.com. Join in the conversation with @codemasters on Twitter or Like us on Facebook at www.facebook.com/codemasters.

ABOUT VOLKSWAGEN R:
Our automobiles exhibit it proudly, and we include it just as proudly in our company name. While the letter ‘R’ stood for ‘Racing’ on the first R-model in 2002, it has meanwhile evolved into a unique success story. With a wide range of individually customised vehicles that thrill their drivers again every day. The passion of motorsports – developed further and made fit for road use by designers and engineers at Volkswagen R. For people with a taste for the extraordinary. http://www.volkswagen-r.de/en/

About Speedmachine:
Experience overdrive at Speedmachine, a first of its kind driving festival. Overload the senses and enjoy a weekend packed with the FIA World Rallycross Championship making its UK debut at Silverstone. Visitors can also get behind the wheel with manufacturer test drives on the Silverstone circuit, eGaming, live music from Dizzee Rascal, Basement Jaxx (DJ Set) & Ministry of Sound. Plus street food, Group B Rally, Players, Prodrive and much, much more all packed into a bumper bank holiday weekend 25 – 27 May. Tickets are on sale now. www.speedmachine.com
Companies: KOCH
Games: DiRT Rally