Third party publisher reveals that its controversial RPG title Shin Megami Tensei: Nocturne has been given a Mature rating by governing board ESRB. 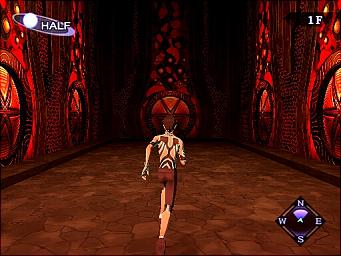 Atlus U.S.A., Inc. announced today that its highly anticipated title, Shin Megami Tensei: Nocturne for the PlayStation 2 Computer Entertainment System, has been given a Mature rating by the Entertainment Software Rating Board (ESRB) along with four descriptors, Blood, Intense Violence, Language and Sexual Themes.

"RPGs have finally grown up with the release of Shin Megami Tensei: Nocturne," said Gail Salamanca, Atlus? Marketing Manager. "We?ve taken great care to keep the localization as true to the creators? original vision with its dark and often controversial themes, as doing anything else would be a disservice to the gaming public. The developer?s have crafted a game that raises the bar on mature storytelling and have combined it with a deep combat system and an overwhelming amount of character customization options never before seen in any RPG. SMT: Nocturne is definitely not for people with delicate sensibilities, but for those brave enough to play it, you?ll be in for a gaming experience unlike any other."

About Shin Megami Tensei: Nocturne
Atlus? platinum selling RPG series from across the pacific finally comes stateside this September when
Shin Megami Tensei: Nocturne hits store shelves. Set in post-apocalyptic Tokyo, the entire population of the world has been annihilated by a global catastrophe called the Conception. Now, the fate of the entire world lies on the shoulders of a young man turned demon, who must battle his way through opposing demonic forces to bring balance to the world to come...or possibly become the harbinger of its destruction.


Shin Megami Tensei: Nocturne is scheduled to launch onto store shelves in the fall with a suggested retail price of $49.99. As a bonus, the game will come packaged with a Limited Edition Soundtrack that contains over 30 tracks from the in-game music. For additional information on the game, visit the official Shin Megami Tensei website at www.shinmegamitensei.com.
Companies: Atlus
People: Gail Salamanca
Games: Shin Megami Tensei: Lucifer's Call