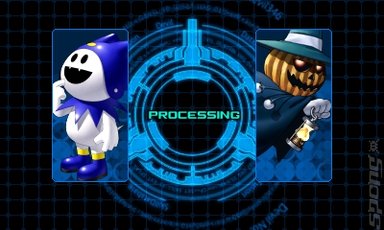 All Images (5) »
Demon summoners in Devil Survivor 2 will have some wireless advantages once the game launches. Thanks to the Nintendo 3DS system's SpotPass and StreetPass features, players will be able to unlock and advance their demons in new ways!

SpotPass
We'll have several waves of SpotPass content rolling out once the game launches (schedule still TBD), but the immediate advantage will be a whole ton of new demons for players to fuse. So if you were looking for your precious Tyrant Lucifer Frost or Wilder Catoblepas, they'll be rolling out to players via SpotPass. Another bonus going out via SpotPass will be some skill add-ons. One of the hallmarks of the Devil Summoner series is cracking skills that are assigned from a communal skill pool, meaning players can't use the same skill on more than one character. Via SpotPass, players will be able to get a helpful magic skill, a powerful normal skill, and a recommended physical skill added to their skill pool. But that's all we're telling you about them!

StreetPass
When you StreetPass with other Demon Summoners, it will allow you to give various stat and skill bonuses to your own demons! But beware, the demon and the stat bonuses are chosen at random - use them wisely!

So once the game is launched, make sure to get out there and StreetPass as much as you can! Those stat bonuses can mean the difference in walking away from a fight the victor or getting swept up off the sidewalk by a Septentrione.

Twitch Stream
We'll be streaming some of the Triangulum story arc today at 2:30 p.m. PDT! (archive will go live on YouTube later.) WARNING: the Triangulum portion contains spoilers for the original Devil Survivor 2, so if you don't like spoilers, you may want to sit this stream out.

View it on our channel here: twitch.tv/atlususa