Not your average racing game! 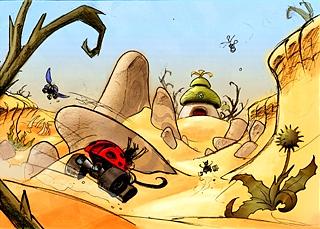 All Images (2) »
Following the success of The Evil Mirror for PSX, PC and GBA, Hugo is now ready and eager to enter the wonderful world of PS2 PC and GBA, the first game being Bukkazoom.

Bukkazoom differentiates itself from other race games by it's combination of interactive and intelligent check points, open and free roaming levels that equally emphasis combat and racing, "realistic" features, unique and intuitive power ups, and a scoring system that opens up for strategies - Bukkazoom takes cart racing to a whole new level.

Many playable characters from the Hugo world will tease and fight each other both verbally and physically in a wacky animated world of fun. The characters will do a lot of talking during the game and they all have their own way of being kind, rude and obnoxious - both when winning and when losing!

Power ups will be dropped all over the levels by insects, differing from usual cart games where power ups just pop up from nowhere, and again the live actions ensure a more immersive experience for players. In a unique new manner you can pick up different power ups, and mix them to get all new power ups with new abilities - again to support emerged game play.

With a refreshing new game play style, a unique mix of combat and free-roam racing, single and multi player possibilities, and exciting checkpoints, Hugo's entry to the PS2 scene is guaranteed to entertain.


Bukkazoom will be available for the PS2 on September 19th, 2003
Companies: ITE Media