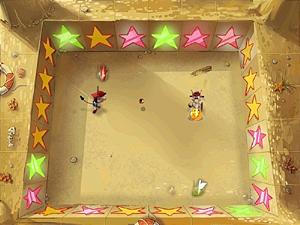 All Images (4) »
Hugo and his family, friends and sworn enemies are getting ready to participate in a fantastic new event? The great Smakkaball tournament!

Smakkaball is a fast and action-filled sport with tons of fun animations, hilarious sound effects and dynamic music. The game takes place in various arena environments where you play to claim the arena as you're own, but only by outplaying your opponent!

In Smakkaball, you fight to control as much of the wall space in the arena as possible. But you can only claim the pieces of the walls that are lit or owned by your opponent. And you do this by throwing, or "smakking", the special Smakkaball against it.

Smakkaball is developed for 6-10 year olds, but it is guaranteed to entertain the whole family. With its mix of action sport, fighting, shooting and wild humour, Smakkaball will be very appealing to the target audience as well as the casual gamer 25+.

In Smakkaball, you will find all the well-known characters from the Hugo universe to choose from. Each character shows up in a cool outfit that emphasises their personal playing style and they each have a shield decorated with their personal symbol. All characters have advantages and disadvantages and are defined by four distinctive abilities: Running Speed, Throwing Power, Body Armour and Downtime. During the game you can upgrade your character and add your skill points to the ability that you prefer. The characters have very wild animations for all possible in-game actions and there will be a lot of shouting, yelling and howling when hitting a wall or an enemy.

Smakkaball has plenty of different power ups with behaviours and abilities such as: Speed Boots, Power Glove and Jackpot, that will generate randomly throughout the various levels.

When playing single player, you play a tournament. When playing two players against each other, you choose freely between characters and levels and play to own as many arenas as possible.

During a tournament, you have to work your way through five different divisions. Each division is made up of three games played against different rivals. It is only the winner of a division that advances to a better division. The rivals naturally get tougher and tougher for each division.

You better watch out because this exciting game with its unique mix of action sport, fighting and shooting, with single and two player possibilities and many great power ups is very addictive and guaranteed to entertain!