Who can stop the Evil witch Scylla? 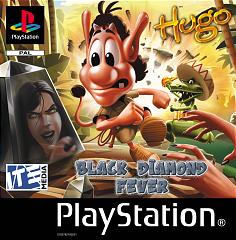 ITE Media is proud to announce another release from the Hugo range, Hugo-Black Diamond Fever which will be available on PS One from 14th February and PC from 11th April.

Scylla the witch is back again, and this time she has in her possession the formula for supreme evil. She needs the rare black diamonds for her formula - and they are only to be found on Jungle Island where the Kikus live. With Don Kroko´s help she captures all the poor Kikus and forces them to toil in the mines, day and night. Can Hugo help the Kikus and stop Scylla before it is too late?

Hugo - Black Diamond Fever is packed with great graphics, action and adventure. Players have to watch out for many dangers on Jungle Island as Don Croco has stationed his soldiers all over the island to keep Hugo away from stopping the production of the Black Diamond Juice.

Through more than 12 different new environments players will see a new side of the well known island and discover a tight plot that will ensure several hours of action-packed fun with Hugo, friends and enemies.
Companies: ITE Media Interactive Ideas
Games: Hugo: Black Diamond Fever