The world's most charming troll is back - and this time with his children! 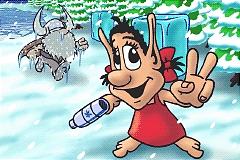 All Images (6) »
ITE Media is proud to announce the release of Hugo - The Evil Mirror available on PS One, PC and Game Boy Advance. The always-charming Hugo is back with his children in yet another exciting adventure.

The evil witch Scylla and her loyal companion Don Croco come up with a plan to capture Hugolina and ruin the Hugo family, they have captured Hugo the loveable troll into a mirror by an evil spell! Scylla crushed the mirror in to 3 pieces and scattered them throughout the Tricky Troll forest! The only chance of saving Hugo is to find all the scattered pieces before it is too late!

This action adventure game is crammed with entertainment, players can change between playing Trollerit, Trollerat and Trollerut on an exciting quest to save Hugo. There is tons of fun and adventure in the Evil Mirror, the question is, who is brave enough to take up this daring quest?

PC and PS One
Each of the three children has unique abilities; Trollerut has a double jump, Trollerat has a snowball catapult and Trollerit has his sledge in the Boar race.
The game play is well thought out and with six different tracks it is always exciting. On each level Hugo's children can gain strength and skills that they can transfer to each other and to Hugo.

The game is designed with a high replay value in mind. It has three levels of difficulty that are differentiated by stronger, faster and increasing numbers of enemies and with less time to spend. The hi-score list shows times and scores for each level and for overall performance, making it easy to compete with friends.

Game Boy Advance
The game features an impressive 65 levels divided into three worlds, with nasty enemies guarding each one. You can use the freeze-gun to stun the baddies into ice cubes. You can also combine ice cubes with frozen monsters to reveal even larger and nastier monsters with better power-ups.
The Evil Mirror is filled with many interesting power-ups. For instance, you can enhance your speed by finding "running shoes", while finding a "snow flake" upgrades your freeze-gun to perform even better.
With many interesting power-ups and with its three levels of difficulty, The Evil Mirror will ensure both newcomers and experienced Game Boy players many hours of fun.