One of the highest rated RPGs of all-time, Shin Megami Tensei: Persona 3 Portable for PSP system, available in stores and on PlayStation Network. 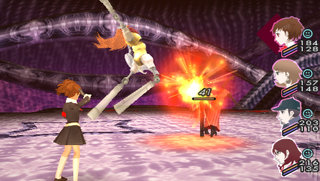 All Images (8) »
Persona 3 Portable releases to glowing praise for its compelling story, unique soundtrack, high-quality voice acting, graphics, solid RPG gameplay, intriguing characters, and more, making it an RPG experience PSP owners won't want to miss. Destructoid gave it their Editor's Choice Award along with a perfect score (10/10), writing, "We loved it before and we still love it." GamerVision stated, "Persona 3 Portable is one of the strongest games in the PSP catalogue, and a shining example of a role-playing game done right," also giving it a perfect 10/10. IGN.com praised the game as well, calling it "...a stellar game..." and offering it their Editor's Choice Award.

Unique among its competitors, Persona 3 Portable is laden with stark contrasts. By day, players attend school, juggle interpersonal relationships, and even court a romance or two. By night, they are tasked with the lofty goal of saving the world from encroaching Shadows and darkness, having to fight off a grotesque menagerie of otherworldly creatures. Featuring the addition of a new player-controlled female protagonist who offers players a fresh new perspective to one of gaming's most inventive narratives, P3P dramatically increases the replayability of a game already renowned for its length and depth. Numerous additional improvements and enhancements, like reduced load times and one-button menu shortcuts, serve to streamline the experience for optimal handheld RPG enjoyment.
Companies: Atlus
Games: Persona 3