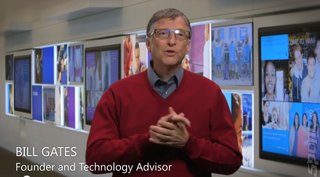 Microsoft has a new CEO who believes in magical things (more about that here). But also in Microsoft news is that fact that co-founder, Bill Gates is stepping back into a hands-on role.

Bill has taken time out from releasing mosquitoes at conferences to make the video you can see below welcoming his new boss. Bill is thrilled. He is also back to make good after Steve Ballmer's reign. Bill says: "I'm thrilled that Satya has asked me to step up, substantially increasing the time that I spend at the company." Then the whooping big news:

"I'll have over a third of my time available to meet with product groups, and it'll be fun to define this next round of products working together."