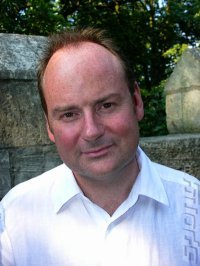 The fact that Charles Cecil and his company Revolution Software have a great deal of Yorkshire in them, and the fact that Revolution is responsible for Broken Sword has nothing whatsoever with us saying:"

"Three cheers for Charles Cecil on the Queen awarding him a membership of the British Empire!"

Here's how he announced it:

"Thrilled, flattered and humbled by all the MBE-congratulatory messages. Thanks so much!"