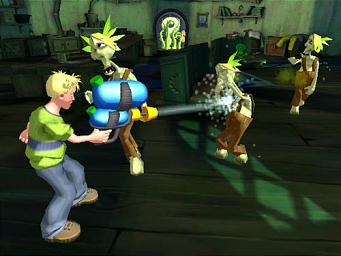 According to reports surfacing over the weekend, UK-based Rare has suffered a fresh round of employee walkouts, described as being of great significance by some sources.

IGN suggests that ??a handful of employees have left due to politics or unhappiness with the directions of various games?? which seemingly confirms speculation that has peaked and troughed over the past few years that there is a general feeling of malcontent at the studio.

Since the massive buyout of Rare by Microsoft, reported here first, the acclaimed developer has unarguably failed to deliver anything like what was undoubtedly promised to its new owner. The critically ravaged Grabbed by the Ghoulies has been followed by a wall of silence regarding almost all key titles in progress aside from the massively multiplayer Conker: Live and Reloaded, a project exclusively revealed on the pages of SPOnG.

As regular readers will be aware, Microsoft?s purchase of Rare has also been linked to the departure of the popular Ed Fries from Microsoft Game Studios, a sad loss to the Xbox project. It is widely believed that Fries was the driving force behind the staggering Ł375 million acquisition ? an acquisition that now seems destined to be the most costly mistake in recent entertainment history.

We have set our spies to work to gather the full skinny on what may, or may not, be happening at Rare and will bring you updates as soon as possible. Reports that a large number of ex-Rare staffers are already in the employ of Eidos, Codemasters and other UK developer/publishers could not be verified at time of press.

Joji 26 Jul 2004 12:43
1/6
Oh dear. How the mighty have fallen. This is a real shame, and MS are left with egg all over their face again. Goes to show that money can't solve every problem. I agree that titles haven't been that hot but I never saw this coming.

What is happening to the u.k developer scene? If one isn't folding altogether this sort of thing happens, or crud product is being made.

I'd like to wish all the ex Rare crew jumping ship the best. We'll always have Goldeneye. Hopefully some better games will be born out of this somehow.

I wonder, where does this leave my fave artist Wil Overton, is he leaving Rare too?

Brown Force 26 Jul 2004 13:46
2/6
This is the worse news ever! First True Fantasy Live gets canned and now the best devoper out there is in tatters...I truely hope this isn't true. To be honest I wouldn't care which console they are developing for, just as long as they are developing and I think the move to the Xbox was a good move.

I personally can't understand whats happening to them. One minute they have two extremely promising titles (Conker looking like the best Xbox title coming) and the next theirs a mass exodus...perhaps the move to the M didn't go down to well with most developers perhaps.

Ether way this is extremley bad news. Though whether it is true or not I guess it will be for the best. Lets hope they find other talented developers to bring in and continue their good work they've been doing there. Perhaps things might start happening then.

Even though this is devastating news, if the developers who aren't happy and aren't doing their job, perhaps they should leave. Wouldn't be the first or second departure from the company would it.

Hal_9Million 26 Jul 2004 19:32
3/6
And people thought Nintendo were acting crazy when they sold off Rare to Microsoft, their rival! Is anybody who founded the company, or who was there in the 64 days still working for Rare? They deffinately haven't been the top of their leauge since Perfect Dark, and that came out in the year 2000. In 4 years, they've so far made 2 games, which in modern standards is rather poor. One of which was a very simple game. I can see them closing up, or microsoft selling them off again. What have they given Microsoft? They seem to have just put a massive amount of cash in Nintendo, their rival's pocket!!

I remember a large thread at the IGN boards several months ago in which ACTUAL MEMBERS AND EX-MEMBERS OF RARE commented on the the buisness post-Nintendo. And up and down each and every employee working and not bashed the company fully, putting tons of blame on the Stamper brothers for having their price. They essentially said that the company was barely a company anymore, and that Rare was the worst possible place to work at in the hands of Microsoft. (Not just because its Microsoft, but also because they had to learn an entire new system after just getting the hang of the Cube.)

I'd kill to find that thread again, if it even exists anymore. It was rather brutal.

Brown Force 27 Jul 2004 08:37
5/6
I think its unlikely that they will close Rare. If lots of people are going to walk, then let them. I think the best thing for Rare is to bring alot of new talent rather than use older existing members who aren't happy with the situation or are unwilling to learn a new system. This would keep Rare producing games with a unique look for the rest of their games. So long as Microsoft own Rare they have all their franchises (Banjo Kazooie, Perfect Dark, Conker etc) I just hope a few of the key staff stay though. Ether way its unlikely they'll close Rare down and cancel Kameo and Conker at this point.

TigerUppercut 27 Jul 2004 10:43
6/6
The whole thing is quite hilarious. Also, very predictable. When I broke this story, for a moment, I thought I was being set up. It came from a slip form a Nintendo executive in London at a drinks bash ? no one really knew who I was, just standing there listening to the conversation. Rather funny!

Nintendo must still be laughing every single day at the price it got, the deal it brokered and obvious fact that the whole thing would never work.

The real sad point is that Ed Fries ended up leaving M$, probably because the deal was pioneered by him.