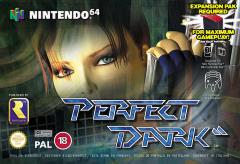 Perfect Dark on the Nintendo 64 remains one of the greatest console-based shooters of all time. So why wouldn't you want to relive those halcyon Joanna Dark days and listen to the game's voluptuous soundtrack? Well, original music composer Grant Kirkhope has placed the Original Soundtrack on his Bandcamp profile, selling the music on a "pay what you want" basis.

Perfect Dark Dual CD Soundtrack was originally released on CD format in 2000, featuring 36 tracks composed by Kirkhope, Graeme Norgate and Dave Clynick. And it's delicious. You can listen to the thing itself using the album player below, and you can name your price and buy the whole thing on the Bandcamp website.

Other soundtracks on the page include Banjo-Kazooie and Banjo-Tooie. As for Kirkhope, he's reportedly just finished work on the soundtrack to the remake of Castle of Illusion Starring Mickey Mouse. So that's another reason to get excited for the upcoming SEGA title, eh?