X03: Day One on the Big Brother Beach 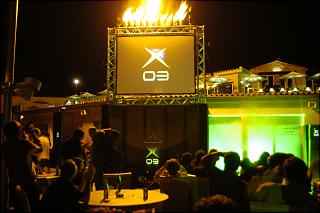 All Images (5) »
You can't fault Microsoft's press-courting techniques - pick a cool location, fly over 1,000 journos and industry bods out there, ply them with free food and booze, and talk about Xbox. Hey, we're certainly not complaining. Somehow, though, this year seemed to carry an air of disappointment, as very little was announced that we didn't already know/expect and many of the subjects that most concerned us remained un-broached. The previous two X0 bashes had quite a lot on show, with loads of upcoming games, deals on the horizon and a general buzz of anticipation. This year, however, the focus has been shifted more towards celebrating the big black box's achievements, as well as discussing Microsoft's key strategy, Xbox Live.

Xbox European Vice President Eduardo Rosini cemented this, beginning by heralding the machine's number two position in the console war, and then going on to proclaim the success of its broadband service. The phrase "It's good to play together" was mentioned for the first of what was to become many times that evening - expect to hear it a lot in the near future.

When Peter Moore, Corporate Vice President for retail sales and marketing, took to the stage the subject matter was 'convergence'. Not that the Xbox 'will be' the pinnacle of the new digital all-in-one entertainment lifestyle, but that it already is - thanks largely to Xbox Live. "It's good to play together", again.

Treading a similar path - and still depriving us of any actual games - Michael Cassius, Senior Director, Platform and Marketing, brought us the news that the broadband service is to be rolled out across a further six European countries, before moving on to the subject of community building powers. 'Nuff said.

And then there was game. A video of Splinter Cell sequel Pandora Tomorrow, to be precise, presented by Ubi Soft's Yves Guillemot. Not much on show though, but the appearance of multiple Sam Fisher-types led to just a little excitement. Guillemot then went on to inform us that we are to expect further details of the game in a month and that the company's other upcoming games - Rainbow Six III and XIII - are the best things since the machine that slices bread.

Things were picking up a bit by now. After announcements about promotional strategies - namely the offer of a free two-month Xbox Live subscription and a new Ł4.99 monthly payment plan - Ed Fries stepped up to bring us Namco's fantastic looking Breakdown, Digital Illusions' Rallisport Challenge 2 - which is to benefit from Microsoft's XSN online service - and upcoming stuff from new bosom buddies Rare, in the form of Grabbed by the Ghoulies and the much-anticipated (and impressive looking) Kameo. Not a whiff of Perfect Dark though.

Nor even the vaguest scent of the killer titles that are on everyone's lips, Half Life 2 and Doom III. Or mention of Microsoft's rumoured Christmas price cut.