Hampshire-based developer takes on ?the best?. 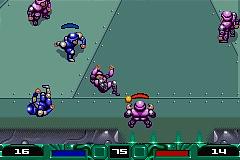 Speedball 2 - one of many fine games developed by now-defunct Crawfish
Climax has announced that it has snapped up ?the best people? from now defunct handheld gaming alchemists Crawfish, to make up its newly-formed portable games team.

Specifically, the firm has snapped up Cameron Sheppard, founder and MD of Crawfish, who has been employed by Climax as Managing Director, and ex-Crawfish coder Mike Merren, who joins Climax as Development Director.

?We're delighted to have Cameron, Mike and the best people from Crawfish onboard" stated Karl Jeffery, CEO of Climax. "Crawfish's unfortunate demise has enabled us to strengthen our handheld division with some exceptionally talented individuals who will add enormously to our existing team. And with such an exceptionally gifted team in place, we're now in a position to expand our handheld development programme.?