But will it be on the backwards compatible list? 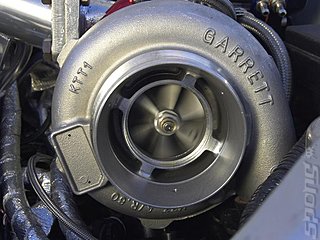 The good part of a Volve S40 yesterday
Something new to file in the quirky folder coming out of the New York Times this morning, as Swedish teacher-mobile manufacturer Volvo announces an interactive and highly aspirational game-based advert.

Upon completion of the course, you are allowed out on the open road, with three course and car combinations on offer. You can take the S40 to the Californian leg of the Pacific Coast Highway, blast round the Monza Grand Prix circuit in an S60R, or take the XC90 to that Ice Hotel in Jukkasjarvi in Sweden, the one that?s always in Wallpaper magazine.

So what?s the point? According to Volvo, Microsoft and developer Climax, the discs will be made available to those showing interest in buying a new Volvo motorbox throughout next year. The idea, we imagine, is that players get a glimpse of the James Bond lifestyle afforded to Volvo drivers as they ding your bumper, forcing their way into parking spaces that are far too small, or smashing smaller, lighter cars to smithereens with their ?I?m alright Jack? attitude to motoring, an all too noticeable trait with modern XC90 drivers parked in clots around every middle class suburb primary school the length and breadth of the UK.

Of course, we like Climax. We met them once in a hotel and had a great talk about two-stroke motorcycles, chips, and whether you should be allowed to have a drunken sun-bed session in said hotel. (You should, but we weren?t allowed in case we fell off it. Ridiculous.) We can?t help but wonder, however, if our best friends from 2002 are being led by the nose by their co-developer, an un-named (and therefore shadowy and probably evil) New York design agency.

Microsoft was quick to point out that this will be the first of many one-offs of this kind, with the use of its hardware for point-of-sale cajoling likely to become commonplace in the coming year with planned software for Xbox and the upcoming 360.