Mega Drive classic getting a sequel on XBLA, PSN, Steam 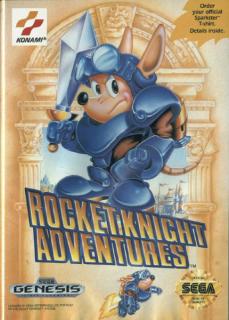 They said it couldn't be done. That nobody would remember the classic jet-packed marsupial. But now it's official - the 1993 Mega Drive classic, Rocket Knight Adventures, is being brought back to life by Konami for the Xbox Live Arcade, PlayStation Network and Steam platforms.

The news comes after a preview from 1UP.com was published yesterday - that would pretty much confirm the existence of any such game, wouldn't it? Set up as a sequel to the original 16-bit game rather than a remake, development is being handled by Climax Studios, the UK team that also created Silent Hill: Origins and Silent Hill: Shattered Memories.

According to 1UP, the gameplay and storyline will be a homage to the original game's designer, Contra veteran Nobuya Nakazato. The rocket-powered protagonist, Sparkster, becomes disenchanted with the opossum kingdom he saves in Rocket Knight Adventures after they allow the evil pigs to live with them. One day, living in peace and quiet, he notices a war raging between the pigs (who are now allied with the opossums) and an army of wolves.

Looks like the new game will retain the same classic side-scrolling platform action too, with a hint of 3D graphical improvements added to the mix. Colour us excited at the prospect of seeing Sparkster again!
Companies: Climax Konami
Games: Rocket Knight Adventures