Sony quotes research to back up its claims. 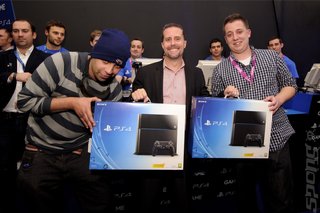 According to research that Sony's not being too detailed about, around "31% of people who have bought a PlayStation 4 had an Xbox 360 or Wii but not a PS3 in the last hardware generation".

This at least is the figures being used by PlayStation's American VP of marketing John Koller at E3 in LA last week and if validated means both Microsoft and Nintendo have some work to do.

Koller told Stephen Totilo that the research also indicated that, "17% of people who have bought a PS4 didn't own a console in the previous generation."

Says Koller, "The person that we've picked up since launch primarily is someone we call the connoisseur, someone that loves, unequivocally, loves games. They are the people who, when you walk in [to their home], there's no books on their book shelves. They're all game packages.

"They're the people who stood in line at midnight [for the console's launch]. They really are a fantastic consumer for us. They're a great part of the PlayStation nation. One thing that's interesting, though, is that we're starting to see a lot more of what we thought were going to be adopters later down the cycle coming in really early."