Xbox One Price Slashed by ASDA 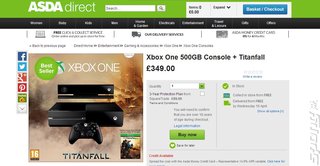 UK retailer ASDA has introduced a pretty substantial price cut to the Xbox One.

The TitanFall bundle of the console is now Ł349 at the supermarket - a full Ł50 below the 'estimated' retail price of Ł399.99. That brings the cost in line with that of a standalone PlayStation 4. The standalone console, in one of those fun retail oddities, is still Ł379 (which, of course, is still 20 quid less than the ERP).

Microsoft itself cut the price of both the standalone Xbox One and the TitanFall bundle from Ł429.99 to Ł399.99 at the end of February.

Similarly, the TitanFall bundle got a $50 price cut in the US to $449 back in March.

As of December 31st Microsoft had sold three million Xbox Ones. By the beginning of March Sony had sold six million PlayStation 4s.