The Xbox One Designer and Building In Kinect

Also a rather tired Mountain Dew and Doritos reference from Microsoft 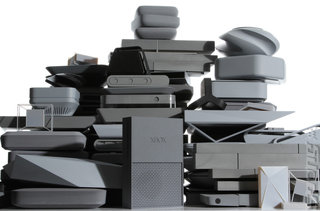 At the top of a puff piece about the Xbox One designs that failed to make the cut - and a profile of Xbox One designer Carl Ledbetter - there's a line about him queuing up to be 29th in line on launch day...

“They’re passing out gamer food — Doritos and Mountain Dew,” Ledbetter said. At the top of the piece. Seriously, good old adverts eh? Anyway, Ledbetter and his designs are more interesting than this cheap trick.

He joined Microsoft in 1995 as an industrial designer for the PC hardware group where he worked on the IntelliMouse (and specifically its control wheel). Then according to Microsoft, "Over the years Ledbetter designed (or helped design) a number of other mice, keyboards, trackballs, gaming devices, laptops and the Xbox 360." He then went to work on Zune.

Remember Zune? Carl does, “Zune was incredible. It represented our first effort bringing together hardware, software and services. That was a huge undertaking. The company hadn’t done anything like that before," he says rather remarkably.

Fortunately for him, in 2010, he became senior industrial design manager for Xbox. "His tasks, in order: design the new Kinect sensor, and redesign the next-generation Xbox 360. Then get started designing the next generation of Xbox (code name: Durango)."

It's here that we discover that Xbox One was always going to be "more" than games, "“There was this conundrum in that we had to meet and satisfy desires of core gamers and Xbox fans, and at same time we wanted Xbox to reach out and mean something to new people. From a design perspective, how do we make that happen? That was a big challenge," he says.

Elsewhere, he tells Develop that, "early on Microsoft even toyed with the idea of building the Kinect into the Xbox One itself. A permanent, non-removable feature. And one of the key reasons it decided against it were based on looks."

“We actually built models of that,” he says. “We pushed ourselves, can we put it all in one? Is that going to work? And the technology just isn’t there yet. As soon as you have something much bigger than the Kinect sensor people don’t want to put it by the TV, it’s too big.”

Thank the lord KInect wasn't built in though? Or do you love your Kinect?
Companies: Microsoft

May|'14
Kinect-Free Xbox One Selling Well
May|'14
Xbox One Update: External Storage and More
May|'14
Official: Halo 5: Guardians Hitting Xbox One in 2015
May|'14
Microsoft's Amazing Kinect Claim