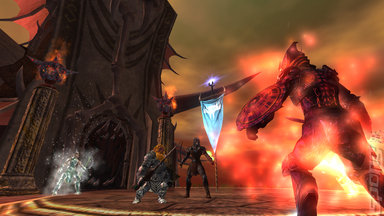 Director of Development for the EverQuest Franchise at SOE, David Georgeson, thinks of himself and other Massively Multiplayer Online game makers as "street performers" dancing jigs and juggling for every penny they can extract from you via their MMO acts.

He says, "We?re effectively street performers: we go out there and sing and dance and if we do a good job, people throw coins into the hat. And I think that?s the way games should be, because paying $60 up front to take a gamble on whether the game is good or not? You don?t get that money back."

This is in relationship to the controversial Free-to-Play (F2P) model of gaming in which a game is initally indee F2P but in order to progress, gamers must fork out additional cash for add-ons.

"There?s nothing wrong with the subscription model. I have personal opinions, which I?ll go ahead and share because I?m just that cocksure of myself. I think that free-to-play is the way that gamers should want their MMOs to be, and the reason I think that is that if we don?t do a really good job and we don?t entertain the player, we don?t make a dime," he told IGN.

His justification being that with a boxed copy that you pay $60 for, well, it might be a "turkey" and you can't get your money back. With F2P you play until you realise the game's a turkey and you've not spent anything.