GTA Housers to be Honoured 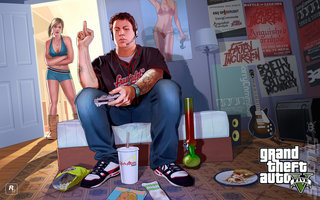 In a move very much like the National Foundation for Cement giving a large cement badge to Bob and Craig Cement, the people who invented Cement and made Cement famous and brought Cement to a wider audience, BAFTA is finally to give a prestigious Fellowship to Sam and Dan Houser of 3D Grand Theft Auto fame / notoriety.

BAFTA (British Academy of Film and Television Arts andgames) announced that, "Rockstar Games will be presented with the Fellowship at this year’s British Academy Games Awards ceremony at the Tobacco Dock, London, on Wednesday 12 March."

Harvey Elliott, is Chair of BAFTA’s Games Committee. He is also, "CEO of Marmalade, overseeing the Marmalade Game Studio developing titles for young audiences across mobile device" and he's said this:

“It is hugely exciting to be able to recognise the amazing contribution made by Rockstar to the games industry over the past 16 years. The creativity and passion exhibited by the Rockstar teams have inspired a generation of game developers to raise the bar in every aspect of game development. From design and mechanics, through to storytelling, cinematics and audio immersion, and in the process creating games that compete so profoundly on a global stage across all entertainment media. Rockstar, this Fellowship is wholly deserved."